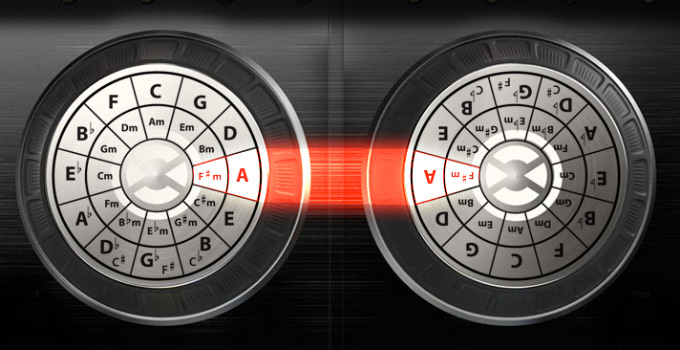 A matter of common knowledge about music mixing is that the DJ makes the tempo of two tracks match. This technique is called 'Beat-Matching' and is practiced since the invention of tempo-adjustable turntables like the Technics SL 1200, launched in 1972. In the era of digital DJing however, thanks to real time audio processing, matching the harmonic part of a song became possible too. But it requires a different skill set, to be discussed in this post.

What is mixing in key?

Compared to just playing tracks back to back, beat-matching opened a whole new world of possibilities: to blend tracks seamlessly into each other. But it only reflects a small portion of the musical content of a song: it's tempo. Besides tempo, most pieces of music also include melody and harmony. And it goes without saying that matching these qualities in a mix would enhance it far beyond mere beat-matching.

Mixing in key expands the concept of mixing from simply beat-matching towards harmonics-matching.

Mixing in key only became possible in the digital DJ environment. Platforms like Traktor, CDJs, Serato and many more provide the option of Key Lock – locking the pitch of a track regardless of its tempo changes (in music production also called 'time stretching'), and Key Shifting – to deliberately change the key or pitch of a track. With these features, the DJ can not only control the tempo of a track, but also its pitch.

To make good use of these features additional skills are required:

How to detect the track key?

In music theory, the key of a piece is the tonic note and chord that gives a subjective sense of arrival and rest. It also represents a frequency.

Before mixing two tracks in the same key, we need to know that they are, in fact, in the same key. So how do I know the track key? Simply by listening to the track and finding the track key on a keyboard. I use a simple keyboard app on my mobile phone - Garage Band. I sing the note that best represents the harmonic center of a song and then find that note on the keyboard in Garage Band.
Some programs like Traktor Pro offer automatic key detection. But I recommend to not blindly rely on this feature – in my experience it fails 20% of the time.

In western music theory, there are 12 different keys. They make up an octave — a doubling in frequency. When looking for key-matching tracks, we want to mix tracks that are either in the same key or in a key that falls in an interval of fifths.

In the Western system that we use, an octave is divided into 12 notes. Moving up an octave is actually doubling the frequency. If the starting note is one kilohertz, an octave higher would be two kilohertz.
The distance between one and two kilohertz is divided into 12 equal steps, which represent the notes, or keys. The white keys on a piano keyboard are named C, D, E, F, G, A, B, and then it starts over with C. The black keys are called B flat (Bb), A flat (Ab), G flat (Gb), E flat (Eb), and D flat (Db).

A fifth is the fifth step in the scale, and it’s always relative.  So starting from C, a fifth up would be G. And frequency-wise it’s half way up the octave. So if C is one kilohertz, G would be 1.5 kilohertz. It's the next best mathematical match after the octave and sounds pleasant to the ear. That's why it makes harmonic sense to mix in this circle of fifths: it sounds right and creates the least perceived distortion.

The circle of fifths There are 12 keys. If we only mix in the same key or within the circle of fifths, only a small portion of our music collection is available for mixing (2/12 or 16 percent).
A track in C can only be mixed with another track in C or G.  Key shifting by 1 semitone up or down triples our options:
Keyshift -1 semitone: C becomes B and is mixable with B and E
Keyshift +1 semitone: C becomes Db and is mixable with Db and Ab

This way, the available mixable tracks become 6/12 or 50 percent!

This is why Key Shifting is so important for mixing in key. Many DJs start out with mixing in key and become frustrated by the limitation of mixing choices resulting from it.  Key shifting enhances the mixing options by 200%.

Mixing in Key is a great and still not really common skill every digital DJ should have. Not only does it enhance the over all flow and uniqueness of the set,  it's also a lot of fun and and puts a smile on your face when transitions become remixes.
The entire third part of the Traktor Video Tutorial is dedicated to Mixing in Key and Key Shifting, giving you a bunch of further details, techniques, examples and a custom Key Mapping to download.

Getting Started With Music Production

Music, Gear & Promotion – How To Be A DJ

3 Proven Ways to Get DJ Gigs