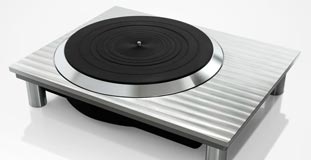 Technics turntables were completely dominating the professional market in the 80ies and early 90ies. Launched in 1972 by Matsushita, they quickly took over the live DJ and radio scene foremost because of it´s direct drive high torque motor design. Push-button-cueing and scratching became possible for the first time and were enthusiastically adopted by hip hop DJs.

The other amazing feature Technics introduced to the market was Variable pitch-control, allowing the rotational speed to be adjusted between -8% and +8%. Now beat-matching was possible and the SL 1200, later 1210,  became the inevitable and dominant DJ tool for many years to come. The revolution of digital music, starting in the 80ies, gained momentum rapidly. The convenience of having 20 tracks on a CD combined with quickly evolving CD players started pushing vinyl out of the market towards the end of the 90ies. Matsushita Electric Industrial Co., Ltd re-branded themselves into Panasonic Corporation in 2008 and shortly after that, in 2010, discontinued the production of the Technics series. The second hand market price for 1210s skyrocketed soon after that. Thanks to archive.org, we still can take a look at the last version of the Technics website.

Analog music is gaining back market shares – who would have guessed?! WIRED Magazine says:

Recent data collected for the British Phonographic Industry shows that in the UK sales of vinyl are up 56 percent year-on-year, reaching their highest mark since 1994. Is it likely that vinyl will mount a genuine comeback against digital streaming, which could top 25 billion streams in the UK alone this year? No. But neither are audiophiles and purists willing to give up on analogue formats, and especially not those who are prepared to spend upwards of £20,000 on a Technics reference audio speaker setup.

It makes a lot of sense to now resurrect the Technics series, which was only dormant for five years. Michiko Ogawa, director of Technics and executive officer at Panasonic says:

"Turntables are a very iconic product for the Technics brand. It is important to show our sincere dedication [to that]. The turntable market is very small but it is a very important brand product."

According to the presentation at IFA, the new Technics turntable will be completely re-engineered but still reflect the esteem of the classic model. Direct drive included. It will be released in 2016 without a price tag es yet. Can´t wait!

The video of the Announcement at IFA:

Getting Started With Music Production

Music, Gear & Promotion – How To Be A DJ

3 Proven Ways to Get DJ Gigs